The counterpart of Baji Quan is the Piqua Zhang, or Splitting or Hanging or Deflecting Palm. While the movements of Baji Quan are short and linear, the movements of Piqua Zhang are circular and far reaching. Thus, the Piqua system is most effective for reaching out to opponents. Derived from the movements of the snake and eagle, Piqua Zhang is a relatively soft system compared to the hardness found in Baji Quan. Even though Baji and Piqua are two independent styles, it is best to practice both because they can complement each other by enhancing the yin and yang within each style.

Originally Piqua Zhang and Baji Quan were actually part of the same system. During the time of Wu Zhong, the supposed originator of Baji Quan, Piqua was also part of Baji Quan, which was originally called Bazi. However, at some point the art was split into 2 systems, and it was not until 100 or so years later that Li Shuwen paired the 2 arts together again.

Pigua Zhang’s power is from the accelerational force of the arms, which are often in rotation. The hip movement in Pigua Zhang is more subtle and gentle compared to Baji Quan, because you only need enough to guide the big chops to the target, whereas in Baji Quan, the hammers, punches, elbows and swings rely completely on the quick and powerful rotation of the hips, and sinking to release power. The use of the legs, however, is even more dramatic in Piqua, than it is in Baji, since it helps to much in optimising the reach.

Unlike Baji Quan, which had weapons incorporated into it a long time ago, weapons in Piqua Zhang did not become part of the system until the 1930s. Yet these weapons were based on battlefield movements which were integrated into the Piqua fashion of movement, and include the Miao Dao (horse sabre) which is a very large calvary blade, and the weapon which is now often associated most with Piqua Zhang. The other weapons that were added to Pigua were the ‘Crazy Demon’ staff and the standard Jian (straight sword).

Piqua Zhang today is often practiced in a very over-reaching format, which looks wonderful for display purposes, but is not always that applicable in combat. However, Master Chen has taught Piqua in an ancient way that revolves around long, relaxed strikes, similar to Tong Bei Quan, but with more shoulder extension and circular motions. These movements, in my opinion and experience, are far more applicable to combat and in many ways are similar to the relaxed form of striking in Russian Systema. This way of moving, combined with Tong Bei Quan and Xi Yang Zhang movements, are the foundations for relaxed movements within the Baji Zhandao system, and so should be studied in earnest, both for combat and for health, for within relaxation comes fluidity and flow.

It is the chopping motion of Piqua that is used for the first test to try one’s hard qi gong. Within Baji and Piqua are two very important nei gong stances: Baji Zhan, which helps build Golden Bell/Iron Shirt/Diamond Qi gong which will be explored in other blog posts, and Purifying Pole Qi Gong; a Piqua stance, similar to San Ti Shi in Xingyi (the most fundamental stance of that style). Purifying Pole Stance helps develop iron palm. To gain the first black sash in the Zhandao system, the practitioner is required to break a hard baked Chinese Brick with his/her hand, using a relaxed strike. This is developed using the Purifying pole stance, Piqua slaps practiced very many times and iron palm conditioning on mung bean bags for at least 6 months, 5 times a day for 30 minutes a day. Once this has been achieved, normally the practitioner will find it straight forward to break a brick with a relaxed strike. This is to show what is possible. In reality, you do not learn martial arts to fight a brick! (Although if you get it wrong the brick does hit back, hard!!!) Yet it is a great exercise to illustrate the power within you when you relax. Considering it only takes 20-30lbs of force to break a clavicle, knowing you can break a brick means incapacitating an aggressor with a slap to the base of the neck is child’s play. This is why, when combined with Baji Quan, Piqua Zhang was so feared; because it was effective!

In the Baji Zhandao syllabus, this complete Piqua Zhang schedule is learnt during the sixth black sash level. However, drills and movements are learnt from the very first day of training and Piqua Zhang is found in all the Zhandao forms and many of the Ji Ben Gong (Basic work). 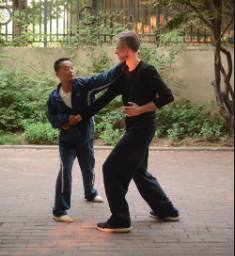 The late Master Zhou of Tianjin demonstrating Piqua Zhang on an attacker.