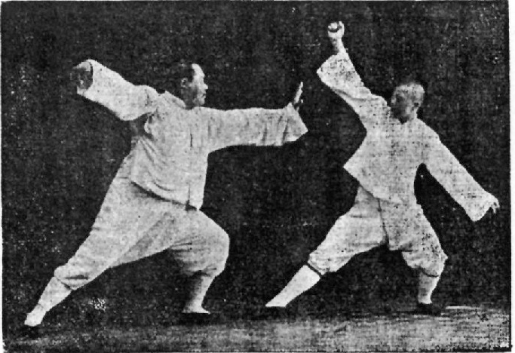 Taiji Quan (Grand Ultimate Fist) or as often written in the Wade-Giles Tai Chi Chuan, is arguably the most famous style of Wushu in the world. This is thanks mainly in part to Yang Style; the most famous (in so much as it is the most widely practiced) of the 5 main styles of Tai Chi; Chen, Yang, Wu, Huo and Sun. There are many other styles, but these 5 are considered the most important, or at least most wide-spread.

Despite what many practitioners say, write, record and report, the origins of Taiji Quan are not really known. Many claim that it comes from Chen Village, where Chen style (the oldest of the 5 main styles) originates from and is still heavily practiced to this day. Again, the Shaolin sometimes claim that it belongs to them, but yet again I see no evidence for that. The most likely origins are from Mt Wu dang, the birthplace of Taoism, and arguably the beginnings of most of Chinese Culture. As with other arts related previously in other blog posts, its more likely that a Taoist monk, wandering as they did, came across the Chen Village and in exchange for food and lodging taught some one, or some people, the art of Taiji quan. However, Wudang Taiji Quan today oddly enough seems to emulate Yang Style Taiji, so it’s authenticity can definitely be called into question. It is unlikely, just as with modern Shaolin kung fu, that the style of martial arts practiced in Wudang today, is very reminiscent of what was practiced 2000 years ago.

I’m not going to go into any further discord on the origins of Taiji Quan, or even about it’s deep philosophy. There are many books written on both subjects, I suggest you do your own study. What I am going to write about here is how Taiji Quan (specifically Yang Style) aligns and connects with Baji Zhandao, give you a basic history of Yang style and what we practice from it.

The originator of Yang Style is Yang Luchan, who was born at the very end of the 18th century. He studied Chen style Tai chi originally by sneaking a peek through a hole in the wall of the training hall at Chen Village, where only members of the family were taught, and practiced on his own what he saw. He obviously was a natural genius in movement, since when called upon to spar with the Chen family, non of them could defeat him. That was all from just copying what he saw, with no correction or sparring partner until that moment. From then on they taught him properly. When he left the Chen village, he went to Beijing where he began teaching, and was so sought after, that the Emperor himself hired him to teach the Imperial court and bodyguards. This is of particular relevenance to us as Baji Quan had until that moment been the main staple of training for the Bodyguards, plus Chen tai chi had been around for a while by then, so if it had been rated as any good, one can summize that the palace would have investigated it as a potential style worth learning. They had obviously rated Baji as more relevant up until that point since that was what they had settled on as the main form of kung fu for the Emperor and his guards. Yet, then Yang Luchan comes along with his unique take on Chen style Tai Chi and suddenly it has relevance. Based on that alone, I would say that Yang style is worth investigating further.

It is said that Yang Luchan was undefeated, but that he never seriously injured any of his opponents. His level of skill was considered to be one of the highest ever of any martial artist. In fact, even the name ‘Taiji quan’ is because of Yang Luchan. When he began his practice with the Chen family the martial art was known as Mein Quan (cotton fist) or Hua Quan (subduing fist). It was reportedly the scholar Ong Tong, upon witnessing one of Yang’s fights, that he felt Yang Luchan embodied the physical characteristics of the Taiji philosophy. Thereafter, due to Yang’s soft and gentle approach to movement and fighting, it was known as Taiji Quan. Three of Yang’s top students would go on to either begin or be the forefather’s to the other 3 main styles; Wu, Hou and Sun style. So certainly in the last few hundred years, one can argue that Yang Luchan was singlehandedly the greatest influence on the development of Taiji Quan. This is a second reason why Yang style is the Taiji style we practice in Baji Zhandao. However, that also hints that Wu, Huo and Sun all have a place in our practice as well. One of the great things about Baji Zhandao is its openness in development. In some ways it is like Jeet Kune Do in it’s philosophy; use whatever works. Wu style is considered even more combative than Yang style, so it maybe that this is worth investigation as well. However, Yang is what gives the Taiji Quan foundation, so when it comes to Taiji Quan training, this is the first thing we investigate in this system.

A third reason we practice Taiji Quan in the Yang format, is because it is what teaches us to be truly soft, yielding, and gentle, but structured and rooted. Yang Taiji is practiced and taught today by descendents of Yang Luchan, and they practice many forms, all variations of the original 300 step form that Yang Luchan practiced. The 300 step form was replaced with the 108 step form, which is the longest version practiced today. In the Baji Zhandao system we build up to this form, by beginning with the basic 24 step form. There are shorter forms and others that are in between in length, but since we do not exclusively train in Taiji, but in fact have many styles of Kung fu to practice, we stick to just these 2 forms. We do, however, also investigate the use of staff, straight sword and sabre in Taiji, since the use of weapons always highlights where you are weak in your movement. Yet it should be noted, that unlike with older styles of kung fu like Baji Quan and Tong Bei Quan, the weapons have been added to Taiji, post the creation of the fist forms, and not the other way around.

As well as the forms, we also play with Tui Shou (push hands) and various aspects of Qi Gong that are linked or often associated with Taiji practice, such as the Wu Qin Xi (five animal frolics) or Ba Dian Jin (8 Pieces Brocade), for example. These are considerably older than Taiji Quan and have actually no specific connection per se, but these 2 Qi gong sets, along with a few others that we practice, are often played together, since the philosophy and movement behind Yang Style Taiji and these Qi Gong sets are so similar.

In the Baji Zhandao syllabus, this complete Taiji Quan schedule is learnt during the third black sash level, but elements and forms from Taiji are taught to beginners and intermediates of the Zhandao as a tool to teach relaxation and structure. It should be noted that we have many basic drills in our Ji Ben Gong (Basic work) that are reminiscent of Taiji movement. However, Master Chen is adamant that these are in fact original Baji Quan movements, and that Baji, along with Piqua and Tongbei, are the forefathers to younger styles such as Taiji, Xingyi and Bagua. This not only gives us an interesting origin story, but it also illustrates just how much all these styles are related within the Baji Zhandao system. 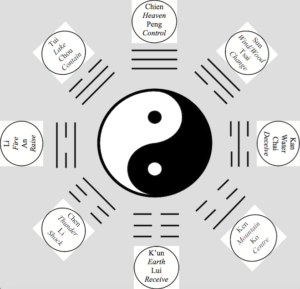 Taiji symbol of Yin Yang and the 8 harmonies of life. 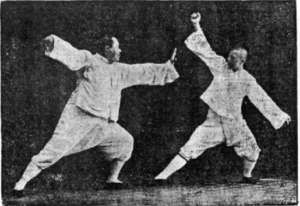