Within Kung fu circles in the west, many have actually heard of Tong Bei Quan, but unfortunately it is often in reference to a particular Shaolin Fist form that is often taught after the basics near the beginning of one’s training in Shaolin Kung fu, and is not in reference to the actual style of Kung fu that was often practiced by folk masters in North China for close to 2000 years if the legends are to be believed.

Tong Bei Quan (‘through the back fist’, and is also known sometimes as Baiyuan Tongbeiquan – 白猿通背拳; ‘White Ape Through the back boxing), is a famous martial art within China which specializes in large opening and closing movements often involving whipping like power and with continuous actions. The name ‘through the back’ represents the power which is generated by passing through the back and to the extremities. It is a style of kung fu that is very important for Baji Zhandao, as along with Piqua Zhang and Xi Yang Zhang, it dictates the type of relaxed striking and movement we use within a Baji Quan, Xing Yi Quan and Bagua Zhang format. Many of the first Ji Ben Gong (Basic Drills) we learn in Bajizhandao are Tong Bei Quan drills.

Tong Bei Quan has been feared in history for its powerful and highly efficacious combat fighting techniques. No matter the fighting distance, with specialized striking hands and unique power generating methods, whether striking or wrestling, Tongbeiquan is a no nonsense traditional Chinese Martial Art.

According to folklore a very capable master named Yuan Gong fought with a master of the Mojiao (魔教, Mysterious Sect) and lost. As a result he lived in seclusion in nearby forests and bushlands. It is said that through the years he developed long white hair and beard and when people saw him they referred to him as Baiyuan Laoren (白猿老人, White Ape Old Man). Additonal legends suggest that a Daoist named Chen Tuan developed the style during the Song Dynasty. References to a Tong Bei Quan Master Han Tong (韩通) during the Song Dynasty are also found in other historical records. Tong Bei Quan’s basic precepts are Taoist in nature and many of the training methods in Tongbeiquan are similar to those of the internal styles. In traditional Tongbeiquan training, several parts are included: basic training (stance, arm & leg drills and hard qi gong conditioning), a variety of fist forms training, two-person free sparring, qigong training and weapons training; straight sword, spear, sabre and the shorter staff known as ‘Bang’.

The two main styles of Tong Bei are Qi Style and Shi Style. There are many distinctions between the two, but in summary, Qi style is the older of the two, focusing more on simplicity and power whereas the Shi style concentrates on exquisiteness and suppleness. In the Zhandao System we focus more on the former: Qi Style. This has more relevance and brotherhood to Baji Quan than the Shi Style.

Master Chen has described Tong Bei Quan as the younger brother to Baji Quan, with Piqua Zhang as the sister. All 3 come from a similar place, most likely with a Taoist influence. All 3 are very old internal styles of kung fu, and he believes all 3 are the parents to the more modern and popular internal styles of the day: Taiji Quan, Xing Yi Quan and Bagua Zhang. It is these 6 styles that have the biggest impact and influence on the Baji Zhandao system, but other styles such as Tang Lang, Wing Chun, Chuo Jiao Men, Gong Li Quan and Xi Yang Zhang also have a part to play. This then allows kung fu to be opened up to the world. Anything that works in with the principles of these styles can be added to Baji Zhandao, whether it is from Japan, Brazil, Korea, the Philapines, Thailand, Russia, or the West, if it makes sense, then use it! Just in this way, Tong Bei Quan is a very relaxed and open system to practice. The Yin to its Yang however, is that for millenia it was a close door style, so it was often passed down through a family or only a few chosen students. Now we are lucky that it is free and open to us to be used by anyone, and that is thanks in part to Master Chen.

In the Baji Zhandao syllabus, this complete Tong Bei Quan schedule is learnt during the seventh black sash level. This is because, other than Baji Quan, it is a massive syllabus to learn, so it is taught in its entirity at a later stage of training. However, elements, drills and forms are taught to students much earlier within the Baji Zhandao training schedule, some as early as the first day of training! 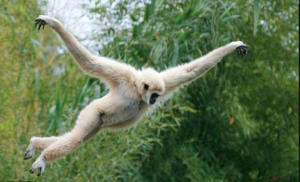 The White ape that inspires the name of the style: note the long reach.