Chuo Jiao is a very old Martial art that began during the Northern Song Dynasty and is attributed to Deng Liang, who is said to have created the style on the basis of the 18 basic foot movements found in cuju (Old Chinese football). Apparently he created the basics according to calculations of the Chinese abacus to form a chain of foot movements incorporating 108 variations. Chuo Jiao literally means ‘Piercing’ or ‘Poking Foot’. In fact, Chuo Jiao’s reputation with kicking is so lethal that a common saying was, ” Once Chuo Jiao is released, if the person is not killed then, he would be fataly wounded.”

Chuo Jiao is considered a complete martial art system. As well as empty hand techniques, it also encompasses internal development and traditional weaponry. With strategic and unique methods of fighting, very dangerous kicking techniques, fluid body movement and intelligent ground fighting concepts, Chuo Jiao is arguably one of the most comprehensive traditional Chinese martial arts. Being an ancient martial art of the battlefield, Chuo Jiao has developed through countless generations to be highly effective. In some styles training in weaponry and combat strategy is still included today.

Modern training consists of many fists, jumps and kicking routines, although possibly originally the jump training was for building strength and power, rather than technique, since it would have been viewed as less practical. These days it is mainly practiced in Beijing, Hebei and Liaoning. According to legend, once Deng Liang had created Chuo Jiao, he taught the monk Zhou Tong the style, who later passed it on to his pupil General Yue Fei. General Yue Fei has the same sort of fabled status in China as Robin Hood has for the English.

Chuo Jiao has also been called by other names. Some of the outlaws who appear in the famous novel ‘The Water Margin’, such as Wu Song, were experts in this style; this is why Chuo Jiao was alternately known as the “Water Margin Outlaw style”. It has also been known as “Mandarin Duck Leg.”

In Beijing the style was connected or linked with Fanzi Quan (Crazy Fist). This was thanks to Feng Keshan, a general in the failed Taiping Rebellion of the early 19th century. He was a Chuo Jiao & Fanzi Quan Master who combined what he had learned to create Chuo Jiao Men. After the failure of the rebellion, Feng went into seclusion in Hebei Province, Raoyang, with two other experts. There he taught the Wang Family Fanzi Quan, which emphasizes the hands, and to the Duan family he taught Chuo Jiao, which emphasizes the feet. During practice, the families would exchange techniques and now you have Duan and Wang style Chuo Jiao, which both contain elements of Fanzi Quan.

Some of the kicking methods are used in the Baji Zhandao system, particularly in Si Zhan and Wu Zhan (4th & 5th) forms, as well as aspects of our Ji Ben Gong (Basic Drills). Master Chen has previously mentioned that Chuo Jiao is a very important martial art with some amazing techniques, but it is not necessary to learn the whole art in order to make use of it within the Zhandao system. So as of this time, Classical Chuo Jiao is not taught in our syllabus as a complete system like Baji Quan or Bagua Zhang. However, certain forms and drills are explored throughout the training. 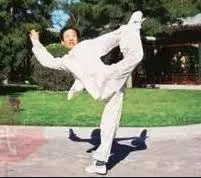 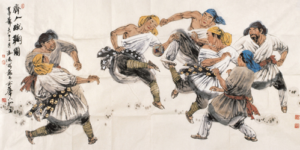 Ancient Chinese Football, thought to be the origins of Chuo Jiao Men