Xing Yi Quan might mean “Form-Intention Fist”, or “Shape-Will Fist”; there are various intepretations of the name. It is characterized by fast & aggressive, linear and angular footwork with both direct upper body movements, and explosive power that’s most often applied from a short range and attributed to internal energy. A practitioner intends to overwhelm an opponent, by simultaneously attacking and defending. Methods vary from school to school, but always include bare-handed fighting training (mostly in single movements/combinations and sometimes in forms) and the training of weapons using identical body mechanics to that used for bare-handed intense fighting, which is actually how classical styles use weapons since the movement comes from the weapon, not the other way around which is common with modern styles of kung fu. The most basic notions of movement and body mechanics in the art were heavily influenced by the practice of staffs and spears, which is why it is very similar in this regard to Baji Quan. However, Xingyi is certainly simpler than Baji, and in some ways this is its genius!

The true origins of Xingyi are unknown. The earliest written records are in the 18th century, and are attributed to Ma Xueli of Henan Province and Dai Long Bang of Shanxi Province. Legend credits it’s creation to renowned Song Dynasty (960–1279 AD) General; Yue Fei, who supposedly was a Chuo Jiao Master, but there is no actual evidence for this. It ought to be noted that in Chinese culture, it is common to attribute the creation of great traditions to legendary individuals. Supposedly, Yue Fei created Yi Quan from his knowledge of using a spear (very possible), and that this later gave birth to Xingyi Quan by a martial artist in the Ming Dynasty; Ji Longfeng.  This last detail is not so badly disputed: Ji Longfeng is considered the first person on written record to have been practicing Xingyi, although at the time he called it Liu He (6 harmonies), which was developed from the use of spear.

Xingyi as a title for the art was not used until Li Luoneng, a student of the Dai clan, who were descendants of Dai Longbang, the second disciple of Cao Jiwu, the first discple of Ji Longfeng. Li Luoneng was a martial artist proficient in Gongli Quan and Tongbei Quan, from Hebei during the 19th Century. After much persuasion, he eventually learnt Dai Clan’s Xin Yi, which he then morphed with his own style to create Xing Yi Quan.

A condensed version of Xing Yi Quan was taught to Chinese officers at the Nanjing Military Academy during the Second Sino-Japanese War for close quarters combat. This included armed techniques such as bayonet and sabre drills alongside unarmed techniques.

Ironically, Xingyi, along with Bagua and Taiji, are referred to as Wudang styles of Kung fu. whereas, in actual fact, the Shaolin have a potential greater claim to Xingyi, particularly in relation to the animal movements found inside the system.

There is a great deal more to the history and development of Xingyi Quan than there is time for here. Including the mythology about one of the past masters developing upon Xingyi whilst held as a prisoner in a small cell for many years with his hands and feet shackled, causing all his practice to become small and upright. It has been most definitely modernised for Wushu competitions, although the style that we practice in Baji Zhandao is a Hebei style that has hopefully clung mostly to its roots: it’s lack of flowery movements and repetitive practicality indicate that this is so. It was Hebei Style Xing Yi Quan that has major influences on another art called Yi Quan, which is quite popular in China, but not the rest of the world. Other styles come from 2 other provinces: Henan (of which the style is the most aggressive of the three) and Shanxi (which has feet closer together and uses more evasive & agile footwork).

Schools of the Hebei branch emphasize Xing and Yi before developing a higher level of relaxed structure, and have a slightly different evasive footwork. Both the Shanxi and Hebei branches use a twelve animal system with five elements while the Henan branch uses ten animals. Depending on the lineage, it may or may not use five elements. Due to the historical complexity and vagueness of the lineages, it is uncertain which branch would constitute the “authentic” Xing Yi Quan.

Xing Yi Quan features aggressive, shocking attacks and direct footwork. Most of the training and footwork are practiced in a linear fashion. This hints at both the military origins and the influence of spear technique alluded to in its mythology. The practitioner’s goal is to reach the opponent quickly and drive power through them in a single burst of Qi (energy). A direct thrust like a spear. The body must move as one with one’s intent (Yi 意) and coordinated power (Jin 勁) utilizing tight circles (usually in a forward direction). This display of explosive power in Xing Yi is referred to as ‘Fa Jin’ (發勁), the same term used in many other traditional Chinese Martial Arts.

Although it’s outward appearance is hard, emphasis is often on the cultivation of soft, internal power by way of Qi gong in the Sān Tǐ Shì (3 bodies power) stance, which teaches you how to hold the head, torso and lower body along one vertical line; this is very reminiscent of ichimonji no kamae, the most fundamental posture in Taijutsu from Japan. At a high level, the Xing yi practitioner is trying to create a spiraling power through his movement in based off of this Santishi bu. As a result, in order to maintain balance and the line that you are fighting along, all kicks are classified as low kicks and the emphasis on economy of movement is key, allowing a simultaneous attack and defense.

The syllabus for Xing Yi is quite straight forward. After learning how to hold Santishi in a Zhan Zhuang style Qi Gong, along with 5 animal movements of Qi gong, specific to Xing Yi, we practice the 5 elements as a foundation: Metal/Gold which is a chopping down action known as Pi; Wood which is a crushing/direct strike like an arrow action known as Beng; Water which is a drilling upwards action like a wave cresting known as Zuan; Fire which is an exploding cannonball action known as Pao; and Earth which is a disecting action known as Heng. These introduce you to the fundamental footwork, breathing cycles, arm spirals and powerful explosions of Xing Yi Quan and like everything in Martial arts, the first things you learn at foundational level, these are the most important of the art. Later there is the chance to learn the 12 animal movements associated with Xing Yi Quan, and that then leads onto all the linking fist forms: 5 element linking form, Ba Zi Gong (8 fighting works), which teaches a further 8 new fighting movements in addition to the 5 elements and 12 animals, 8 word skill which is a combination of the animals and elements and Shi’er Xing Lianhuan which is a combination of all the animal movements combined. There are also a number of two person set forms and 4 weapons forms all based on the 5 elements movements: Spear, staff, broadsword and straiht sword. Along with the relevant techiniques for all of the above!

The direct manner and power of Xing Yi Quan has led some practitioners, including Master Chen, to conclude that Xing Yi was actually a child of Baji Quan. This is however, much to the chargrin of some Xing Yi practitioners for unapparent reasons, but if they are happy to take the fable of General Yue Fei as a part truth to the origins of Xing Yi Quan (i.e. it was taught to the military by a military elite and the way that Chinese armies operated back then was that the best fighters were the generals), then it is far more likely that Xing Yi was a simplified version of an art similar, if not exactly like Baji Quan (bearing in mind that the term Baji Quan is a very modern one), since that was what the best fighters in the armies of China practiced.

In the Baji Zhandao syllabus, this complete Xing Yi Quan schedule is learnt during the fourth black sash level. However, the 5 elements and possibly the 12 animals will be introduced much earlier in the proponents training regime. 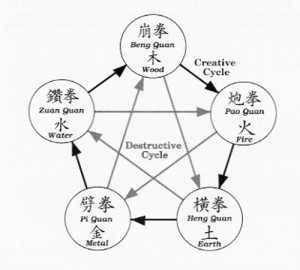 The 5 element theory of Chinese Medicine and Xing Yi Quan. 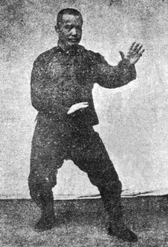 A practitioner in Shantishi; foundational movement for Xing Yi Quan