Baguazhang literally means ‘8 trigram palm’ and it refers to the I Ching, which is one of the canons of Taoism. You can see on the right here, a representation of Bagua in the I Ching. In actual fact, as far as Baji Zhandao is concerned according to Grandmaster Chen Fu Sheng, it is only the first inner layer of 8 lines and broken lines that actually represent Bagua. The second layer is termed Ba Hong, the third, outer layer Ba Yin and the final complete line surrounding the entire image can be perceived as Ba Ji. This is representative of both the specific and general realities of life. The Yin Yang image is representative of ourselves, a human being, or life force. Bagua could be representative of the ground we stand on, or the house we live in; our immediate surroundings where we place our feet. Ba Hong may represent the village, town, city, county, province or state that we live in, and Ba Yin the country or continent. Ba Ji might therefore be representative of the world or even the universe itself. On a microscopic level, Yin Yang would be the nucleus of a cell, and Ba Ji the outer membrane that surrounds it. Bagua would be the most fundamental reaction or action happening within the cell itself and will often spiral around the nucleus. Hence Baj Zhandao is sometimes referred to as the Martial Art of inner space.

Research now shows that the lemniscate is the true direction of nature, whether it is a genetic helix or the force direction when you throw a ball. Interestingly a lemniscate is a sideways figure of 8, as in ‘Ba’ which is Chinese for 8. The lemniscate is also the symbol for infinity, and can therefore be linked to longevity. Indeed, the correct flow of the lemniscate, unrestricted, could be considered the correct path of qi flow in the body and therefore one of optimal health. Ba gua is therefore aligned with the natural flow and direction of the body, along with wellness and long life, when applied correctly. No wonder 8 is the luckiest of numbers in China!

The formal creation of Baguazhang, as a martial art, is attributed to Dong Haichuan. He is said to have learned from Taoist and possibly Buddhist masters in the mountains of rural China during the early 19th century. However, this is a common theme amoungst Taoist internal systems. It reflects and implies that Taoist sages had been practicing Ba gua, or something very similar for generations, long before Dong Haichuan existed. In fact Wu Shamans had been practicing circle walking for hundreds of years, but when someone started applying martial techniques to the movement is unknown. As with all classical martial arts, it is very unlikely that one man created the movement that we are familiar with today, but that in fact it was sculptured and wrought, like any true skill, over many generations, passed from one to the other and improved upon, both by the talent of the individual practicing it, and through the ever-changing landscape and experience of that person: If one experienced warfare and survived, many valuable lessons would have been learned from that experience and would therefore have been passed to the next generation, and so on. One individual may have experienced a very large and powerful opponent, and another may have experienced a fast and supple opponent, both of which would have created different understandings of how the body should move. Many Chinese authorities do not accept the Buddhist origin of Baguazhang. They maintain that those teachers were solely Taoist in origin and probably priests; the reasoning being that Baguazhang’s frequent reference to core concepts central to Taoism, such as Yin and yang theory, I Ching and the Bagua diagram. The Buddhist connection most likely came from Dong Haichuan’s disciples, some of whom were Buddhist.

Dong Haichuan worked as a servant in the Imperial Palace. During that time he impressed the Emperor with his graceful movements and fighting ability. He was therefore appointed as a Martial arts instructor to the court and also became a bodyguard. Dong Haichuan taught for many years in Beijing, and had a number of students. Possibly the most famous of these students were 3 of his disciples; Yin Fu, Cheng Tinghua and Liang Zhenpu. They would go on to create their own unique styles of Bagua. The two most famous today are Yin Style created by Yin Fu, and Cheng Style created by Cheng Tinghua (Liang Zhenpu also created Liang Style). Yin Style is known predominantly for its striking techniques, were as Cheng Style is known more for its throwing techniques. It is also worth mentioning that two other famous styles; Gao style and Jiang style both originate from Cheng Style (Gao Yisheng & Jiang Rong Qiao, the respective originators of the style, were both disciples of Cheng Tinghua).

Cheng style is the Bagua style we use in Baji Zhandao. This is primarily because this is what Master Chen learnt as a child, but also because, other than Baji Quan, it provides the majority of our throwing techniques in the Zhandao system. Cheng Tinghua had an extensive background in Shuaijiao and Mongolian wrestling before he became Dong Haichuan’s fourth disciple. As such, the majority of Cheng style movements can be used as methods of takedown. It is said that Dong Haichuan would only teach Bagua to students who had extensive training in other martial arts, and once those students had learnt the basics of Bagua, Dong Haichuan would then teach them Bagua according to their unique style. Interestingly, Master Chen continues this tradition, by teaching different things to different disciples, based largely on how they move. He has often said that each disciple should take what they learn from him in the Zhandao system, build upon it and make it their own.

Cheng Tinghua is also credited as possibly being the most influential person for connecting Bagua with Xing yi. Unlike Baji and Piqua, which originally were one and the same art and then separated, Bagua and Xing yi were originally, completely bereft of one another. This is because it is thought that 3 Xing yi Masters,  Li Tsun-I, Liu Te-Kuan, and Chang Chao-Tung, all learnt from Cheng Tinghua and as a result they passed down these brotherly connection between the two systems of Martial Art.

Unfortunately Cheng Tinghua died at 51/52 years old (a peak age for a martial arts master) when he was gunned down by German Soldiers during the Boxer Rebellion of 1900. Fortunately, unlike Dong Haichuan, Cheng Tinghua had been very open about teaching Bagua to anyone who was interested, and so he had many students who were rather proficient. This has allowed Cheng style to continue and flourish around the world.

Today Cheng style is often taught by starting with various methods of circle walking and changing direction, such as hook step and swing step. The circle walking practices of Taoism stretch right back into antiquity. These energetic exercises were designed to fully awaken the practitioners energy body and elevate their consciousness. In the Zhandao system we also teach 12 Posture Nei Gong, distinctive to Bagua, in order to improve balance and flexibility before embarking on the complexities of Bagua forms. This is then followed by the 8 basic palms which are held by walking the circle, most noteablely the green dragon claw, along with various conditioning drills and tea serving movements. Once these basics have been drilled many times, one begins learning the 8 Main Palms form. The most distinct and obvious difference in Bagua, compared to other styles of kung fu are the spiralling of energies throughout the body. Something similar can be seen in Taiji practice, called Fa jing, but it is not quite the same. These spiralling energies, originally utilised for spiritual cultivation, are directed out towards the extremities enabling controlled bursts of internal force to be projected into an opponent. Each of the 8 Main Palm forms is known as a ‘palm change’ and each of these is in turn based upon one of the eight generative Gua (Trigrams) of the classical Taoist text, the I Ching.

In Cheng style, once these 8 Main Palms have been cemented, Swimming Body Form and 8 interconnected small forms follow. There are also weapons attributed to Cheng style, including G’un (staff), Jian (straight sword), Ma Dao (Horse Sabre) and most iconically Lu Jiao Dao (Deer Horn knives). This weapon is esotericly meant to reflect the different phases of the moon and with practice actually beginning to resonate with the celestial Qi of the night time leading to altered states of consciousness. Whether it does, is highly debateable, but it is certainly an effective weapon in the Bagua Practitioner’s hands!

Baguazhang is not considered a martial art for beginners; some prior experience of the martial arts is recommended before studying it. For that reason, it is hinted at, but not really studied in the Zhandao system until you reach 5th Black Sash level. As the popular saying goes within Chinese martial communities: We study Bagauzhang to show us how bad our Gong Fu is!

The health aspects of Bagua cannot be ignored, but neither should the effective combat techniques. In Zhandao, most of the forms have a Cheng Style influence, particularly Er Zhan (2nd Battle Form) and Qi Zhan (7th BattleForm), with San Zhan (3rd Battle Form) and Si Zhan (4th Battle Form) containing bagua elements as well. On the health side of things, some of the nei gong, especially Wu Yun (5th cloud nei gong set) also has a heavy influence from Bagua. One could argue that it permeates the entire Zhandao System, as does Baji quan, and I do not think that would be an false assumption.

Ultimately, Bagua is a beautiful art to both watch and parttake in. One’s life can become richer for it.

Bagua according to the I Ching.

Representation of the Lemniscate 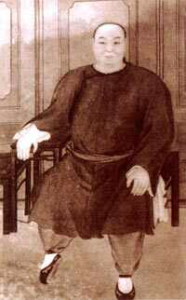 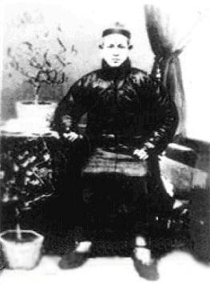